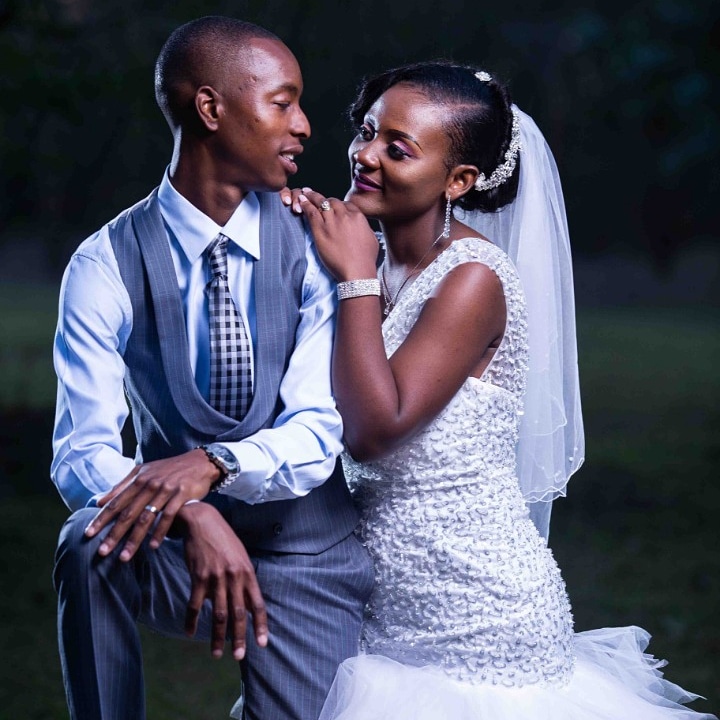 …it all started with a packet of chips

Sometime in 2013, as a young lady was walking from the store, she met a guy who asked if she could share her snacks with him. Neither of them knew that it was fate that had brought them together and five years later, they would be proclaimed husband and wife at Tiffany’s Venue.

With a roller coaster of a relationship like many others, theirs was a special one filled with romantic memories. Delaine Masenda shares their Ideal Wedding and a happily ever after. After dating on and off between 2013 and 2017, the couple got engaged in 2017, where Given proposed to Delaine on her birthday, on a surprise holiday in Cape Town. It did not take time for them to decide to wed. Lobola was paid in March 2018 and the wedding was slated for the 25th of August 2018. This meant there were only four months to plan the wedding.

Delaine and Given knew what they wanted exactly; a formal evening wedding, with their colours being Navy blue and Blush pink. Everything seemed to be moving fast but all seemed on point with wedding preparation meetings being of great help. The wedding eve, the bridesmaids slept at Madokero where they were to prepare for the wedding and the pre-wedding shoot.

The 25th of August arrived, it was a beautiful sunny day and the air was filled with joy and anticipation. Time, however, seemed to be moving faster than anticipated and it wasn’t before long before the bridal team was running late, but they were not going to miss the pre-wedding shoot for anything, the wedding guests would rather wait. Dressed in short grey and pink pyjamas and the bride in a white satin gown, the pre-wedding shoot was a success and the bridal party had to hurriedly leave for the wedding.

However, it took the bridesmaids and Bride a shorter time to arrive at the venue as they were staying nearer the venue as compared to the Groom and groomsmen who were about 25km from the venue.

The wedding which had been scheduled to start at 12 started fashionably late at around 4 pm with the groom arriving last. Both ceremony and reception where at Tiffany’s venue, with the ceremony white and serene, with beautiful flowers on the sides of the aisle. The bridesmaids were clad in long navy halter neck dresses with long slits, showing off their beautiful legs and pink heeled sandals. As the bride entered, emotions where high as she cried frantically, she could not believe it.

This was finally the day she was marrying the love of her life. The bridesmaids and some of the guests could not resist their tears. The ceremony went on well with the wedding ceremony officiated by Reverend Maphosa of the United Methodist Church. The sweetest part of the wedding was the exchange of vows. To make it classy, the couple had their vows engraved on wood so they could keep them on display in their home.

The photoshoot that had meant to be a sunset wedding became an evening shoot because of the time the wedding had started. The reception was decorated beautifully with a ballroom feel and Chivalry chairs.

The décor clearly highlighted the fact that it was a night wedding and the navy blue and pink came out beautifully. The bridal party changed to short blush pink dresses and they danced the night away together with the groomsmen who were dressed in their navy suits. This was an Ideal Wedding, where besides time being a factor, it was for the good as it turned out to be a beautiful wedding with beautiful pictures.

Delaine and Given celebrate their second anniversary on the 25th of August 2020. They have since been blessed with a baby boy. Delaine’s advice to the future brides is, “Follow your heart, you are the only one who can make your dream wedding turn to reality so when you decide on a thing for your wedding, stick to it. Sometimes people will try to force their ideas on your wedding, but the most important thing is to stand your ground. This is your day, make it special by doing what you want.” 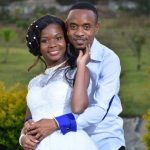 From the first sight, he never let go 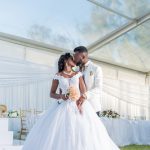