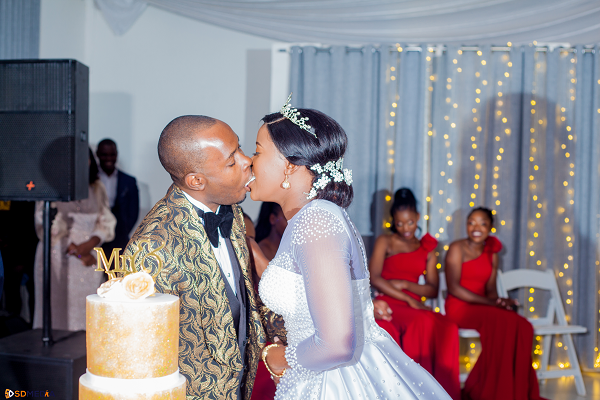 After six good years of dating, it was imminent that Tendai and Simbarashe’s wedding be one of the most memorable weddings. It was a star-studded elegant and classy wedding with 7 masters of ceremony!

Simbarashe paid lobola for Tendai on the 5th of December 2021 and scheduled their wedding for the 22nd of May 2022. The planning was flawless as both bride and groom were hands-on and they knew what they wanted.

Both the wedding ceremony and reception took place at the Golden Conifer functions venue. The theme colors were burgundy, navy blue, and gold. However, the ceremony décor was all white with a floral touch and a hint of gold. The Wimbledon chairs used for the ceremony gave an elegant look.

As common with most weddings, the wedding ceremony was delayed by an hour but the marriage officer, Minister Michael Mahendere managed to officiate the marriage ceremony flawlessly, making the most of the time he had. A few speeches were presented by close family members during the ceremony. Thereafter, the bridal team went for their photoshoot as the guests proceeded to get their cocktails before the wedding reception.

It was quite a big wedding with 450 guests having been invited! The wedding colours came out beautifully in the décor at the reception. Guests were seated on glass Chivalry chairs at round tables which were covered with navy blue and burgundy cloths. The tables were accessorized with centerpieces of flowers and mirrors.

Lunch was served and everything was cooked perfectly by the Golden Conifer catering team. Seven masters of ceremony took charge of the event in honour of Simba, (known as Ba Kevy the Comic MC), who is one of the greatest MCs in Zimbabwe.

The bridal party gave a sterling performance on the branded dance floor and they opened the way for the other guests to also come and dance in celebration of the newlyweds. It was a funfilled wedding reception with performances from popular local musicians, Feli Nandi, Madiz, Ba Shupi, and Winky D.

The most memorable part of the day for the couple was when the couple danced on stage during Winky D’s live performance.

Given a chance to change anything on their wedding day, the bride says, “I would change the time as I would have wanted the wedding to start earlier so that we had more time to celebrate.”

“I would hire my husband to be my wedding planner because he did an exceptional job in planning our wedding.”

As for advice to future brides, Tendai says, “Don’t put your man under pressure because the society has other opinions, do what you feel is right and comfortable for you and not for someone else.” 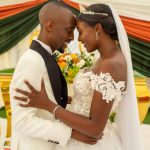